It’s downright frustrating when opponents remain behind walls and barricades for protection. You can unload over a hundred paintballs without marking them, which is where grenades come into play: tossing a paintball grenade over the barricade will mark anyone who’s nearby, allowing you to proceed with the objective. But how exactly does a paintball grenade work?

Paintball grenades are designed to startle, disorient, and even douse your opponents with colorful paint splatters. These compact devices contain a tiny charge with an accompanying short fuse system that detonates on impact when you launch it towards the other team’s turf. Their explosive force is certain to surprise everyone in its wake!

Paintball grenades are immensely helpful in the field, but only if you deploy them with strategic finesse. To make sure these powerful tools perform to their fullest potential, read on for an extensive exploration of how paintball grenades function and the best ways to use them!

What Are Paintball Grenades?

Paintball grenades are part of paintball pyrotechnics used to spruce up the game and confer an unfair advantage to the user.

The selection of grenades varies from simple paint-filled orbs to those with a pyrotechnic charge and fuse that is activated after the pin has been removed. Unlike their military counterparts, these paintball bombs eliminate enemies by splashing them with color instead of slicing into them with metal fragments.

There are two primary types of paintball grenades: non-explosive and explosive.

This type of paintball grenades are the simplest type and some may even be crafted at home. In terms of working mechanism, these can be likened more to water balloons rather than an actual grenade. A rubber tubing is firmly shut on one end with paint inside; while the other end has a slightly sealed arming pin for eventual deployment.

Containing a pressure-filled paint of about 100 ml (3.38 oz), the rubber tubing of this grenade unravels upon impact with hard surfaces, releasing the paint and coating over an expansive area. When the arming pin is pulled and thrown out, it activates by itself to create a magnificent explosion of colors! Any players found within the detonated area will be removed from the competition.

These types of grenades mimic the military’s combat grenades and are filled with a nominal amount of black powder. With their short fuse, they can effectively govern how much force and magnitude is released upon detonation.

This assembly includes a tiny plastic bag containing the paint and fuse wrapped around the banger, then placed inside a fragile fiber case for protection. To initiate the grenade, a fuse extends from the casing’s top and is secured with friction-sensitive material attached to a firing pin. For added safety against accidental detonation, it is also covered by an additional cap acting as catch.

To activate the grenade, remove its cap and carefully pull the ring. This will spark a fuse that takes around three to five seconds to traverse the black powder core of the device; at which point it explodes with immense force. Similar to a military grenade, the paintball version also detonates with an impressive bang and showers its colourful contents over rival players in the vicinity. Anybody caught within this explosion’s range is immediately removed from play.

How do Paintball grenades work?

Paintball grenades use a nominal amount of pressure to burst the thin membrane inside, spilling out the paint and creating an explosive force that propels it forward in a cloud-like formation. When a grenade is thrown, the pressure of the paint inside forces it to disperse into an aerosol cloud. The spread differs based on the size of each individual grenade; however, some can generate clouds as large as 10-20 feet across!

A typical paintball grenade contains about 30-40 paintballs’ worth of paint, creating a devastating effect when tossed toward opposing team members. Players typically use them to either mark or flush out opponents who are hidden behind structures.

Paintball grenades come in a range of forms, and each one has its individual benefits and drawbacks. From the most popular types such as:

This type of paintball grenades are the most ubiquitous type, and usually contain anywhere between 100-200 paintballs. They have a classic spherical shape, and come with a handle or strap to make them effortless to toss.

Smoke grenades can be used to craft a hazy cloud of concealment, allowing friendly players to take cover while they strategize their next move. Pyrotechnic material is encased inside the grenade and when triggered will disperse a formidable plume of smoke.

Flashbang grenades are the perfect tool to disrupt and bewilder enemy combatants. Their powerful detonations generate an incredibly loud sound, accompanied by a powerful flash of light that can easily divide adversaries or provide cover for your own team.

Paint grenades are a strategic necessity for games of capture the flag. These spheres, usually filled with around 100-200 paintballs, can be utilized to clear an area under enemy control in mere seconds! Not only efficient but effective, having this tool on hand ensures that you have the upperhand during your next game.

Always Have an Exact Route

Before hurling a paint grenade during woodsball, be sure to survey the area first for both your safety and performance. If you’re unlucky enough to have it hit a tree branch, it might rebound back towards your spot or even get stuck up in some branches which would end up drenching you with paint! The potential outcomes of the situation threaten your entire team: the grenade could detonate, dousing everyone in paint and eliminating you; or, if spotted on time, a sprint to safety will make you vulnerable to being targeted one-by-one. Neither option is ideal for success.

When utilizing explosive grenades, alert your allies of the impending detonation. This will give them an opportunity to ready themselves and, more importantly, shift their attention towards the target bunker, enabling them to successfully apprehend any of those attempting to escape.Use coded communication in paintball to give your team a strategic advantage, like customizing your ‘grenade incoming’ warning.

Retaining the element of surprise is critical for successful tactical maneuvers in paintball, such as a strategic grenade toss to cover your exit. By keeping opponents unaware of your plans, you can ensure success and secure victory! Let your opponents know that a grenade is coming their way by shouting out “grenade incoming!” in plain language if you’re feeling sporty. This will give them the opportunity to exit the bunker and run away, leaving themselves exposed for you to hit them like presents on Christmas morning.

Paintball grenades come equipped with a pyrotechnic charge that results in an explosion, yet it only has a half-gram weight for safety reasons. Thus, any exposure to moisture will make the grenade ineffective or decrease its explosive capability. Thankfully, paintball grenades are designed to be resistant to damage from both weather and player use. However, they can start becoming vulnerable when exposed to moisture for long periods of time.

It’s not uncommon for paintball players to hurl the safety cap at their enemies instead of a grenade – especially when they are surprised by an intense attack. In these frenzied moments, it is easy to forget which one is which and cause some serious damage.

If you don’t practice utilizing both hands when throwing paintball grenades, it’s easy to get confused. In a split second, you might throw the item in your dominant hand only to realize that it was actually the safety cap!

A Brief History of the Paintball Grenade

In the early 1980s, Bob Gurnsey of Grenade Enterprises made history by creating the first paintball grenade. His groundbreaking invention has had a lasting impact on the sport and remains popular to this day. As the founding manufacturer of paintball grenades, Gurnsey’s company was instrumental in facilitating the very first organized paintball game in June 1981. These iconic explosives were used to kickstart an industry that has since revolutionized recreational activities around the world.

Paintball grenades have steadily advanced since their conception and, despite these improvements, the general design and function remain similar. As of today, paintball grenades are a go-to device for recreational and competitive paintball games all around the world.

How are Paintball Grenades Made?

Paintball grenades are usually manufactured from rubber or plastic and filled with a non-toxic, water soluble paint. When thrown, the pressure inside the grenade causes it to explode upon impact, releasing droplets of vivid color onto whatever lies in its path.

Paintball grenades are relatively safe, as the paint used is non-toxic to humans and animals. Although it may not pose any significant threat to people or creatures, proper precautions should be taken when using these grenades in order to avoid causing property damage. It’s important to use them safely and responsibly for an enjoyable experience with no regrets later!

In this article, we will take a comprehensive dive into the world of paintballs and their components. From discussing… 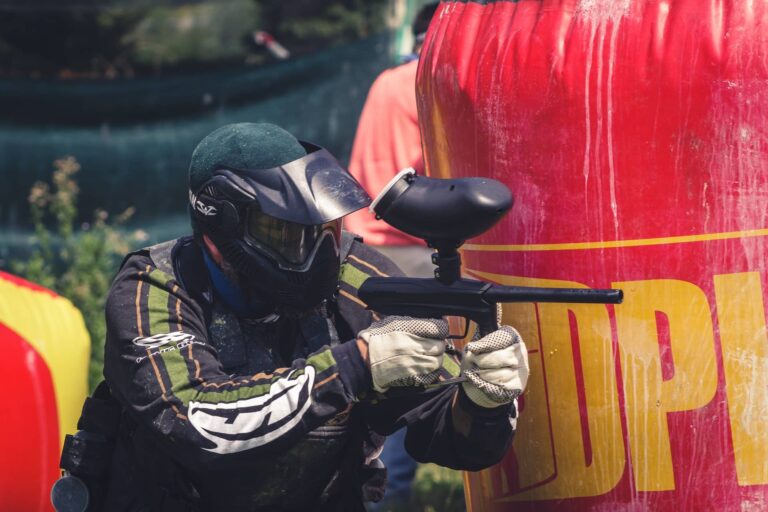 Getting hit with a paintball on your bare skin can leave some pretty gnarly battle wounds, which is apparent…